Roslyn Imrie
I am a mother, a teacher, and a nature lover. I grew up on a mountain we called Owls' Knob in the Ozarks of Arkansas. The first seven years of my life were spent living in a log cabin, far from a store or streetlight, without electricity or running water and after twenty years of travel, I returned to the abondoned homestead. Now I live on a hill by a small lake and work at a public garden. These are stories about nature written from a women deeply influenced by place.

I found a creek yesterday full of cadisflies, stoneflies, mayflies, and dragonflies. All of these flying creatures start off as macro invertebrates who live among the rocks at the bottom of streams. Mayflies spend most of their life under the water and only swarm the air for a single day in which they mate and die. All of these invertebrates are sensitive to water pollution so I determined that the creek was probably spring fed and looking at the large rocks upstream I wondered if it came from a cave. Springs and cave streams are perfect places to find salamanders, so I went off in search of a rare amphibian.

While exploring the creek in search of a salamander, I first stumbled upon a huge Ozark Witch Hazel (Hamamelis vernalis) in full bloom. This winter blooming tree has red and yellow showy flowers that vary from the yellow bursts that bloom on the American Witch Hazel (H. virginiana). Though the American witch hazel has a wide range, the Ozark witch hazel is endemic to the Ozark Plateau. This particular one was bigger than many I have seen growing in the wild and it was clinging to a pile of rocks in the center of the creek with very little soil to draw from. 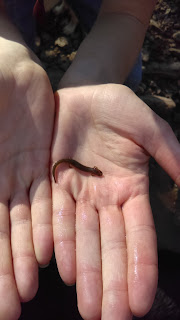 Further upstream I finally found my salamander swimming like an eel in a small rock lined pool. It was young and small; its body looked almost transparent in the sunlight. I held it only briefly since I could see it had gills and many salamanders breath through their skin so the oils from your hand can hurt them. I guessed after researching it later on that it might be an Oklahoma Salamander (Eurycea tynerensis). Though this is not a particularly rare species, I think any salamander is a good sign. The little legs of a salamander are disproportional to their long bodies and on land they are defenseless and slow. Though these soft bodied amphibians stay hidden under rocks or in water where they can swim fast, most species are endangered because they are extremely sensitive to water pollution and are vulnerable to prey. They seem to smile at you with their large mouths even though I am sure, due to their secretive nature, they do not appreciate us and our inquisitive nature. Still, I love looking for salamanders.
Posted by Roslyn Imrie at 6:24 AM